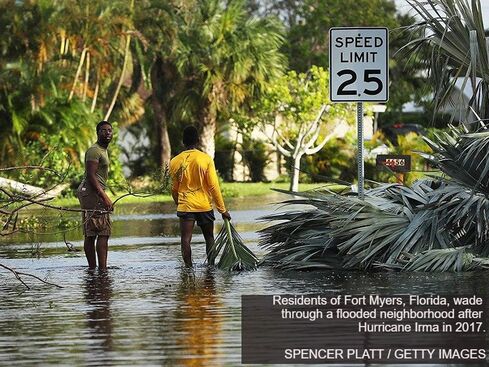 Florida’s Waters Are Rising, But So Are Its People
Residents and city leaders rally around climate resilience strategies, in the absence of federal leadership.
By Alison Cagle | January 17, 2020

In 2017, the most powerful Atlantic storm in history hit Florida. Longtime Florida resident Crystal Johnson remembers how cars clogged every highway leading out of the state as people fled to overcrowded hotels in Alabama or Georgia. Outside Johnson’s apartment, Hurricane Irma unleashed 110-mile-per-hour winds that tossed garbage cans and smashed windows. By the time the hurricane made landfall, over 77,000 people around Florida had crammed themselves into emergency shelters.

Down in the majority African-American neighborhood of Dunbar in Fort Myers where Johnson lives, Hurricane Irma flooded streets and knocked out power for 12 days. After the storm, Johnson and her fellow Dunbar residents made their way to the neighborhood community center, which they expected to function as a basecamp for emergency services.

Instead, they found locked doors.

“This should have been a respite site after the storm, where we could come and recharge, share food, connect with people,” says Johnson. “It was really disheartening.”

Johnson is well known as a staunch advocate for her community. The same year Irma flooded Dunbar’s streets, Johnson ran for city council, aiming to represent the voices of her community amid Fort Myers’ large population of wealthy vacationers. Prominent real estate developers grumble at the mention of her name, while local patrons of a family-owned restaurant along Dunbar’s main road jump to greet her with updates.

After Irma cut Dunbar’s power, Johnson asked the city government to aid her community, which lacks hospitals or even a major grocery store. With no city response forthcoming, Johnson stepped in to get Dunbar back on its feet. She set up a makeshift aid site in front of the community center’s locked doors, and organized the distribution of food cooked by local church members and her city councilwoman. Using social media as her bullhorn, Johnson shared emergency updates from her state representative, including locations where people could get food, water, and other supplies. As word spread, residents started showing up to lend a hand.

“We took care of each other,” Johnson says. “Even though it was a devastating time, it was also something that brought the community together.”

Like many Floridians on the frontlines of climate change impacts, Johnson isn’t waiting for her government to see the writing on the sea wall. City leaders and grassroots advocates are pushing for climate resiliency plans, rallying voters, and collaborating on infrastructure projects that will protect cities from the rising sea.

Hurricane Irma was a turning point for many Floridians who hadn’t previously thought about climate change affecting their lives.

“I would hear about climate change on the news and think the problem was so big,” says Miami resident Bereatha Howard. “There was nothing I could do within my power. What am I going to do — get a rope and tie it around the sun? It just seemed the solution would be so out-of-this-world, it was hard to understand that our actions can make a difference.”

That view changed after Howard decided to take the CLEO Institute’s Empowering Resilient Women class, where speakers described the trickle-down effects of an ecosystem in chaos. Howard learned that she could strengthen her and her family’s resilience to climate change by preparing for hurricanes, increasing her financial literacy, pushing for access to green jobs, and demanding climate action from her local leaders through civic engagement.

Howard was most inspired by how the speakers shifted the conversation from an amorphous scientific concept to an issue that directly affected vulnerable communities.

“You can’t get people engaged just by saying ‘climate change,’” Howard explains. “How does that relate to my life? You get people’s attention by saying their children won't get enough to eat after a hurricane closes grocery stores, or explaining why only some neighborhoods won’t have power.

According to the UN, women suffer disproportionately from climate change’s effects due to gender inequity both in the home and professionally. That’s why the CLEO institute centers women as leaders within their families.

“It really does make a difference when a woman who is head of her household is informed,” Howard says. “When I was living with my elderly father during Hurricane Irma, I was confident because I had prepared everything we would need.”

The need for climate resilience doesn’t end at people’s doorsteps — it extends to their jobs, where climate change can hinder a person’s ability to work. In a city known as the fern capital of the world, farmworkers are pushing for actions that will help them survive a warming planet.

On a 95-degree day in Pierson, a town of less than 2,000 residents in Central Florida, workers sweat as they harvest soft, leathery plants destined to grace the air-conditioned environment of corporate offices.

During these hot days, farmworkers can suffer from “heat stress,” an innocuous-sounding term for an agonizing physiological attack that can lead to heat stroke and even kidney failure if not treated properly. At the fernery in Pierson, where farmworkers are paid by how much they can produce in a day, any worker can describe the agony of heat stress, and the fear that pausing will jeopardize their daily quota.

“I feel like I’m drowning,” says Griselda Lomeli, a worker at the nursery who has experienced heat stress. “I’m suffocating. My heart beats very quickly, and I can hear it accelerating.”

The Centers for Disease Control recommend that employers limit farmworkers hours during very hot days, so that their workers’ bodies can safely acclimate to the punishing environment. But a bunch of ferns yields only 30 cents per barrel, and missing a day’s quota reduces an already low paycheck.

Faced with this untenable situation, farmworkers are uniting to agitate for better conditions. Antonia Aguirre, who began working at the ferneries when she was 14, now organizes with the Farmworker Association of Florida, a grassroots group that aims to build worker power.

A key demand of the group’s 10,000 members is the creation of state-level policies that protect farmworkers from extreme temperatures. This year, in coordination with the association, two Democratic state legislators introduced bills that would require company training on recognizing and treating heat stress. The bill also requires employers to provide outdoor laborers with water, breaks, and protection from the sun.

“The industry isn’t prepared to handle climate change,” says Aguirre. “Employers need to give workers at least a paid hour when they have to rest. The temperatures have gotten too hot.”

While Floridians push for stronger climate change policies in their communities, city leaders are joining forces to strengthen resilience to the climate crisis across the region.

In 2010, the counties of Broward, Miami-Dade, Monroe, and Palm Beach established the Southeast Florida Regional Climate Change Compact, which created an action plan to prepare cities for flooding, sea level rise, and economic and social disruption from climate change.

“The compact has provided an acknowledgement from the elected level of county and city government, that this is an issue we couldn’t avoid — we can’t wait for the right governor [to take action],” says Jim Murley, the chief resilience officer for Miami-Dade County.